gp3 For AWS EBS Volumes: Why, When and How To Switch.

If you’re using EC2 instances, then you should seriously consider switching to gp3 for your EBS volumes. It will save you about 20% on your EBS bill, and in many cases improves performance.

Importantly, it’s simple to change - you can do it to a running instance.

What are we talking about?

EBS (Elastic Block Store) volumes are the disks you attach to EC2 instances. They give you block level storage volumes that can also persist independently from the life of the instance. For many VMs, this is the type of the root volume and of any other attached disks.

EBS offers different volume types - gp2 was the default and often the best choice. It’s a general purpose SSD that performs well for workloads with random IO (as opposed to long sequential reads/writes). The new gp3 is the next generation of this general purpose volume type. As such it will replace gp2. And unlike switching EC2 instance types, it’s super-easy and low risk to change.

When it comes to cost and performance, gp3 is better than gp2 in every way - so definitely worth changing, but see the limitations section. The gp3 volume type is also better than io1 and io2 for some use-cases.

The performance base-level is a consistent 3000 IOPS and 125 MiB/s throughput. You can also pay extra to increase each of those parameters independently, up to 16,000 IOPS and 1,000 MiB/s. In comparison, gp2 gives you 3 IOPS/GB (minimum 100 IOPS) and provides up to 250 MiB/s of throughput depending on the volume size and burst credits.

With gp3, we no longer worry about burst credits - we get consistent performance. With gp2, burst credits allowed the volume to burst to 3000 IOPS for 30 minutes or so, before being throttled to the base level. This was great for spiky loads, but also tripped people up where load tests passed because they weren’t run for long enough, and then hit performance issues in production.

Cost is the other big improvement. The base-line cost for gp3 is 20% less than for gp2 (e.g. in us-east-1 the cost is $0.08 per GB per month, compared to $0.10 for gp2; prices in many other regions are slightly higher, but still give the 20% saving). You can pay extra to increase performance: $0.005 per IOPS per month over 3,000; and for throughput $0.04 per MiB/s per month over 125 MiB/s. Francisco Gimeno’s blog shows some nice graphs of percentage saving for different volume sizes.

To compare like-for-like with gp2, above 1000 GB you’d have to explicitly set a higher IOPS for gp3 (and a higher throughput above 334 GB volume). However, the cost comparison should really be for what your use-case actually needs, tweaking the performance accordingly: not all large volumes need higher performance, while some small volumes do.

First, think about the IOPS and throughput. For small volumes (below 1TB) the defaults are usually fine. If changing from larger gp2 volumes, do you need to match the higher default performance that gp2 offers, or will a lower number do?

In most cases, it’s simple to change a volume to gp3. The change can be made to a volume while it is in active use. In a few clicks or 1 property in your infrastructure-as-code!

Changing via the AWS Console

In the AWS console, navigate to the EC2 service and find the volume. Click Actions -> Modify Volume, and choose the new volume type: 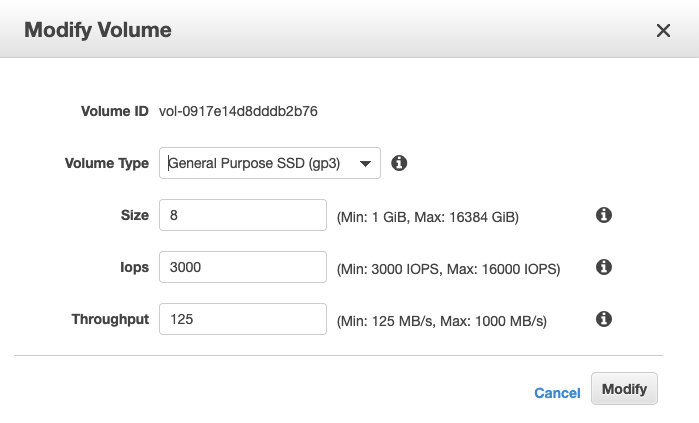 The confirmation dialog warns that “it may take some time for performance changes to take effect.” However, it seemed fast for me (for an admittedly small 8GB volume). The EC2 console’s Volumes listing showed gp3 within seconds, though the volume’s state showed “”in-use - optimising (..%)” for about 5 minutes. When running benchmarking tests with fio on the volume during the change, I saw the IOPS performance improve within seconds. With a larger 1000GB production volume, there was no noticeable interruption to service but it took 39 hours to go from the “optimizing” state to “completed”!

One thing to be careful of is the rollback strategy for your change. If you reach the “maximum volume modification rate per volume limit”, you’ll have to wait at least six hours before changing the volume type again. For me, this meant I could only change the volume type once so any rollback would be delayed for six hours!

Using the AWS CLI, you can change the volume type with a command like that below:

To check progress of the modification (e.g. percent complete, and start/end times), use the command below:

If you use Terraform to provision and manage EBS volumes, changing the type is as simple as changing the string from gp2 to gp3.

Below is some example Terraform showing how the volume type is specified. It shows two ways of defining the volume: inline in the aws_instance, and as a separate volume that is then attached.

Note that changing the root block device from gp2 to gp3 worked for me, without needing to replace the instance (despite the Terraform documentation suggesting otherwise).

If using CloudFormation, be sure to upgrade cfn-lint (otherwise it will say that gp3 is an invalid value for your VolumeType). If you’re not using cfn-lint when writing Cloudformation, I’d highly recommend it!

Below is an example CloudFormation template - the change is as simple as setting the VolumeType to gp3. However, there are a few things to note:

If changing the volume type multiple times (e.g. to roll back), it gets extremely slow: it took about 6 hours to complete the second CloudFormation change (with the volume unchanged until near the end). Presumably CloudFormation was waiting due to the “maximum volume modification rate per volume limit”. The stack was in the UPDATE_IN_PROGRESS state all this time, meaning no other modifications could be made (unless you resort to the “cancel update stack” action) - not good!

There were a few limitations reported for gp3, which might mean you need to wait for adopting gp3 for some use cases. Thanks to @QuinnyPig for the Twitter thread on this topic!

When modifying old VMs, there is a worrying-looking warning that the volume attachment may not support live volume modifications (the documentation links in the screenshot are to Linux and Windows). However, testing this on an old m4.large Ubuntu 14.04 that had been running for over 4 years (!), the change worked perfectly. 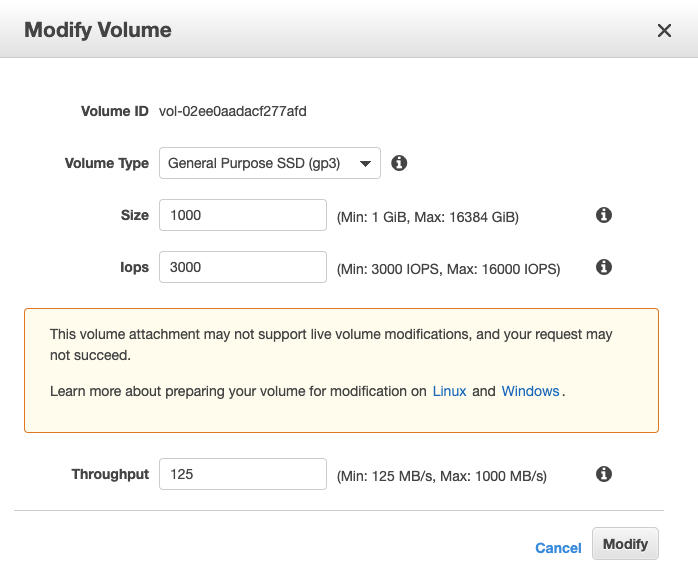 A few other reported issues seem to be fixed now, based on my testing:

If you are using EC2 instances, then you should seriously think about switching to gp3 volume types. If you’re using gp2 (i.e. the previous generation of general purpose SSD) then it will always save you money (usually about 20%) and will improve or match performance. If you’re using io1 or io2 with 16,000 IOPS or lower, then you could save huge amounts.

Making the change is straightforward, so you can start saving on your AWS costs immediately!